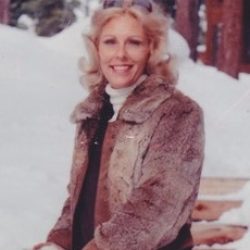 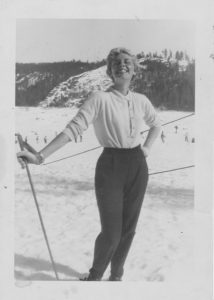 She was a mother to 2 girls, Carrie McMahon and Beth Leavitt. She was an actress and artist from a very young age and was very talented in a number of mediums including paint, sketching and drawing. She was an excellent seamstress who designed and created many outfits and costumes for herself and her children over the years. As a young women she worked as a model and as an actress at Valley College and at the Community Theater in the San Fernando Valley. She took up photographic art as an adult and is best known for her collection of pictures from all over France and Paris. She was a Francophile and loved anything and everything French. She first traveled to France and Paris with her 3rd husband Robert Slacum who was an ophthalmologist. She was able to return over the years with her daughters and also on New Years Eve of 2000 for the millennial celebration at the Ritz, Paris which had been her dream for over 10 years. As an artist she preferred to be called Anne Carroll which was her middle and first names flipped. Her other most favorite thing were her dogs. She had many dogs over the years, first Toosy and Tawney which were Papillons when she was a newly married young woman, next our childhood dog named Coca Cola (after her favorite beverage). We also had a stray poodle named Toby and a Doberman Pincher named Rex. Later she found a Tibetan terrier running the streets of La Jolla and named him L.J. (short for La Jolla). She then moved on to West Highland Terriers, the first one was “W” short for Westinghouse, then J.W. for Jr. Westinghouse and lastly Teddy who is now owned by her daughter Beth. Carol was a fashionista ahead of her time. She always knew how to spot a bargain and when and where to find one. She was famous for pursuing the thrift stores to find designer names. She was a collector and fan of antiques, we spent a lot of our youth at flea markets and swap meets finding special things. She was able to support herself and continue living in La Jolla by innovating a business caring for surgery patients and providing a European Retreat style bed and breakfast for their recovery. She was an avid Rose gardener and spent most of her time in the garden pruning and caring for her immense collection of Roses. She could whip together an elegant arrangement in a snap.

Carol had a passion for living and enjoyed many things in life. She was well traveled and well read and enjoyed teaching others. She will be remembered for all of her artistic contributions as well as her energetic life spirit. She will be buried at the Hollywood Forever Cemetery where we spent many hours as children, feeding the ducks and swans and playing while she and her best friend did grave rubbings. It was an idyllic environment and allowed us to escape the hippie culture that had overtaken many of our local neighborhood parks. The burial date is to be determined due to the current Covid19 virus situation. We will notify everybody once a date has been scheduled.